WIFC make their eagerly awaited return to the open-age WorldNET tournament, with their first trip to the IFA’s blue riband event since 2012 this weekend. While the Vets team has flown the Internet ‘Orns flag at the Big Tam Vets tournament in the interim years, returning to the main draw has been on the club’s agenda for the last two years. With the tournament having moved to Preston, a new experience awaits the 16 man squad. 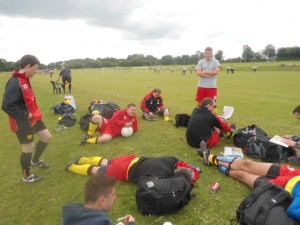 In a shot that echoes through the years, WIFC regroup between matches at WorldNET 2012.

The draw has placed WIFC in a tough group for their return, with previous WorldNET winners Halifax and RC Lens joined by this season’s London Cup winners Stevenage and a competitive Manchester United side. With the first group match kicking off at 12, all eyes will be on WIFC as they attempt to improve on a round of 16 outing in their last trip to the main WorldNET.

Equally as important as the football itself, WIFC have always maintained a healthy tradition of enjoying a good night out after the Saturday group games. Some memorable moments down the years are sure to be added to during the trip.

WIFC’s fulll record from 19 years of WOrldNET participation is below;