WIFC made it to the Quarter-Finals of the WorldNET Cup at the weekend, as the Internet ‘Orns made their long awaited return to the open age version of the end of season IFA tournament.

Having travelled to Preston with a 16 man squad, including a last minute loan of goalkeepers Lewis Duxbury and Neil Crossley from Bury A, expectations of qualifying from a tough looking group were not high. The first half against London Cup holders Stevenage quickly dispelled any lowly ambitions as WIFC raced to a 2-0 lead against their Herts neighbours. Goals from Tommy Twelves and Dave Soloway got the weekend’s football off to a flier.

The second game was a tighter affair. With both sides wary of Lens’ electric start to the group, defeat could have been costly. In a game of few chances WIFC were dealt a blow as centre half Ally Hill was red carded for a bit of industrial language aimed at the referee, but the Internet ‘Orns defended well to hold on for a hard earned 0-0 draw and valuable point. 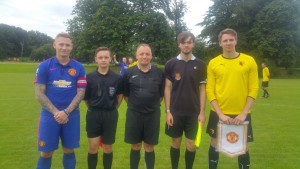 Captain Stu Nicholls lines up with his Manchester United counterpart, along with the targets of Ally Hill’s potty mouth..

Next up was, on paper, the toughest match against the mercurial French team RC Lens, twice winners of the event. With Hill suspended, management duo Moz Clarke and Chris Davis employed a christmas tree formation and Lens struggled to break down a resolute WIFC. Tommy Twelves opened the scoring before Lens equalised with one of their few chances. However, a scorching left foot volley from just outside the area by Connor Church with the last kick of the match earned a memorable 2-1 win in the two team’s long awaited first ever meeting. 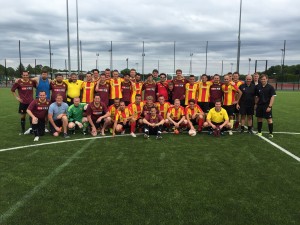 WIFC and Lens finally meet on the pitch..

A win in the last game against 2013 & 14 winners Halifax would see WIFC top the group. Having lost all three matches heavily in uncharacteristic fashion, the Yorkshire side were in no mood to end the day empty handed and with WIFC possibly still having half a mind on the events of the Lens game, Halifax won 2-1 despite a 3rd goal in 4 games from Tommy Twelves. 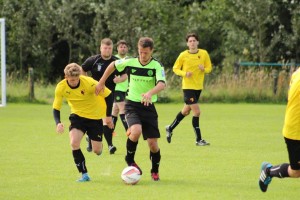 Full of energy as ever, Ben Kelly harries a Halifax player

The defeat did not prove too costly. Finishing with one of the best records of the second placed teams in each group, WIFC were seeded for the Sunday draw, meaning they would avoid the various group winners. A tie with Sheffield United kicked off the Sunday action and WIFC produced a dominant 30 minutes. A host of chances went begging and the Golden Boys should have had more than just a Ross Connor goal to show for their efforts.

Aerial action shot from the 1-0 win against Sheffield United

For just the 4th time in WIFC’s history, the Quarter-Finals of WorldNET had been reached and a first ever meeting with Runcorn Linnets awaited. With injuries starting to mount and an opposition packed with younger players, a brave and determined display from WIFC saw scores level at 0-0 after 30 minutes. Chances came and went for both sides in the extra time period, meaning penalties would decide who would face Preston in the semi-final. It wasn’t to be, as misses from Tommy Twelves and Connor Church handed a 4-2 win to the young Runcorn side.

Despite that disappointment, the team were able to leave with heads held high and with a renewed enthusiasm for the open age WorldNET tournament. Most importantly, the social side of the club was as strong as ever as new friendships were cemented during a typically liquid-based Saturday evening. The two WorldNET 2017 tournaments can’t come quickly enough. 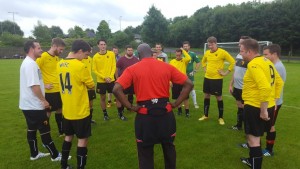 Manager Moz Clarke rallies the troops on the Sunday morning