Watford Internet FC reached the final of the Covid-delayed 2019/20 South East Cup with a spirited come-from-behind 3-1 victory at AFC Wimbledon.

Teenager Alex Newman will rightly take the lion’s share of the headlines with a second-half hat-trick which saw the Hornets recover from the set-back of going a goal down on the hour after a goalless and somewhat attritional first 45 minutes – albeit goalkeeper Matt Mesiano having to make two fine stops.

Newman wasn’t alone in his second-half heroics, however, with centre-half Ben Bateman turning in a particularly impressive display against a barrage of free-kicks and long throws launched into Watford’s box on an uneven Raynes Park pitch which proved tricky going for both sides.

A masterful tactical switch from manager Richard Walker saw the Hornets deploy the pace of Cleveland Brandy as sweeper as well as pushing the livewire Newman up alongside first Ally Hill and then stand-in striker Tom Anderson.

Wimbledon struck first with a fierce cross-shot, and they were ahead until the 72nd minute when Newman raced clear, rounded the goalie and coolly slotted home from a diminishing angle. This was evidence of the visitors taking the aerial route after the break, preferring to avoid the pitfalls of trying to play through the thirds.

Cleveland Brandy – whose cousin Tyrone Brandy made an impressive debut at right-back – picked out Newman for the first and then, with eight minutes to go and penalties looming, Hill flicked on for Newman to slot home.

It was 3-1 and game over in injury-time when Newman was felled for a penalty which he eventually took himself; despite the best efforts to grab the ball of Lamar St-Cyr whose 50-yard run from the left flank sought to deny the youngster his treble.

So an evenly-matched and good-spirited contest finally went the way of the Hornets, who go through to meet long-time rivals and friends West Ham IFC in a final yet to be arranged. 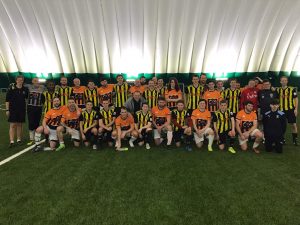 Following a two year hiatus, the WIFC website is back up and running.. all stats and pages have been updated and you can expect to see match reports and new player profiles in the near future.

If anyone thinks something has been missed, please let Dave Messenger know.

The season was curtailed by the Covid-19 pandemic. The IFA league positions as at March 14th stood and Worldnet was cancelled.

Cup competitions were completed in season 2020/21.

AN agonisingly late goal for Maidstone United’s fans team denied Watford IFC at least the shot at a cup final from the penalty spot at the end of an attritional but absorbing South-East Cup semi-final.

The Stones scored with just a minute of injury-time left on the watch, breaking clear from a Hornets’ corner to convert from a low cross.

It was harsh on Watford, who matched the defensive solidity shown by the visitors with a steely resolve to give few chances away on a decent morning for football at Parmiter’s School.

Unusually for IFA football, defensive quality was very much to the fore as neither side managed to fashion anything more than fleeting glimpses of goal.

Hornets’ player-manager Richard Walker plunged smartly to his left to push away Maidstone’s only meaningful first-half effort at goal, then easily repelled a 15-yard shot 10 minutes from time as the visitors looked to make the most of a rare second-half opening.

Lamar St-Cyr scuffed Watford’s best early chance and striker Adam Gallichan hit a post with a side-footed effort as he bore down on the United goal. And debutant Dean Mitchell impressed at left-back, sending in some teasing centres as the game wore on.

John Sitkowski was outstanding at the heart of the Golden Boys’ rear-guard effort, taking an inadvertent pummelling to the ribs at the hands of Maidstone’s giant centre-forward mid-way through the second 45, while the determination of Rob Stone and Max Walters in midfield was impressive.

But it was the visitors who prevailed and, with Watford IFC’s best wishes, will now advance to the final to meet Millwall – who beat West Ham United 3-1 in the day’s other semi-final.

WATFORD IFC will face Maidstone United’s fans team in the semi-final of the South East Cup this weekend, after a win by the odd goal in nine at home to their Kentish rivals Gillingham on March 24th.

The team, managed by Moz Clarke with Richard Walker having to referee, was grateful to two debutants in accomplished centre-halves Tom Curson and Lewis Brentham; Stuart Nicholls disobeying the golden rule of never introducing new players to the squad that are better than you.

The Gills’ persistence notwithstanding, it was more Hornets’ errors that kept the visitors in this tie, with Gillingham’s third and fourth goals of a 5-4 scoreline coming from a clumsily-conceded penalty kick and a comedy own-goal one minute from full-time.

In between the goalscoring action, Watford settled into a decent passing rhythm at times, with central midfield duo James Jenkins and Ben Kelly at the heart of much of the host’s progressive play.

That said, the first goal was 34 minutes in coming. ‘Kenbele’ slotted striker Adam Gallichan through; he lunged at the loose ball which broke off the outrushing Gills’ keeper for Lamar St-Cyr to expertly sweep it home off the underside of the crossbar from the corner of the penalty area.

Gills replied with a tidy leveller to restore parity going into the break, but just three second-half minutes had elapsed when Gallichan was rewarded for an ambitious 25-yard strike when it dipped under the goalkeeper’s grasp.

Two more Watford goals around the hour mark appear to have put the tie to bed. First a Jenkins centre flew across the face of goal and was turned in at close-range by Gallichan, then Mark O’Connor produced the game’s best piece of skill to flick a through-ball over his marker before half-volleying home to make it 4-1.

But Gillingham wouldn’t lie down and hit a second mid-way through the second 45, knocking Watford off their stride somewhat. The home team found a fifth, though, when with 12 minutes remaining sub Ben Bateman slammed home into the side of the net from 12 yards – a well-taken first-time shot after a set-piece broke his way.

Then came two late visitor’s goals and some nervy late set-piece defending by Watford to eventually close out the game as winners by five goals to four.

APPROPRIATELY, it was Richard Murphy – chalking up a club-record 300th Watford IFC appearance – who had the final say at the end of a thrilling 5-5 draw with Millwall supporters’ team.

Internet ‘Orns player-manager Richard Walker insisted that Murphy be charged with the responsibility of levelling the scores with what proved to be literally the last kick of the game, and the veteran weirdo didn’t disappoint.

After Adam Gallichan had been felled when about to stroke home from close-range, Murphy stepped up to notch his 69th goal of a remarkably long and consistent WIFC career – now 50 appearances clear of nearest rival Julian Carrera.

The spot-kick was the tenth and final goal of a belter of a match at Parmiter’s School, which saw the Lions race into a two-goal lead before Charlie Wood followed up to crash home a rebound from debutant Tom Payne’s shot and Matt Mesiano had wrong-footed the keeper with a flick-header from a long free-kick forward stood some 20 yards from goal.

Millwall restored their lead but it was 3-3 by the break after Wood went to the top of the season’s goalscoring chart, nodding home his 5th of the season from Walker’s cross following a quickly-taken short corner.

Watford had the better of the second-half’s opening exchanges but the Lions it was who went 4-3 in front some 15 minutes in when their always-dangerous central midfielder Dan Marsh played a series of one-twos to slot home what might have been the goal of the game on another day.

That honour, however, belonged to Ally Hill, who strode onto a clearance before unleashing a 35-yard blockbuster which the Lions’ keeper barely saw before it billowed the top of the netting under the crossbar.

Then Watford goalkeeper Ali Cameron marked his debut with a stunning save at close-quarters to round off an assured display, despite the unflattering goals against column.

The visitors did break through again, though, with a fifth goal around eight minutes from time before Murphy capped game number 300 to level – the spoils shared after a pulsating encounter.