So often having had to play second fiddle to the Hammers’ fans team in recent seasons, the Hornets erased the memory of several painful trips to Flanders Field with a fully-deserved victory inspired by a lethal exhibition of finishing from five-goal Mark O’Connor.

But a gritty rear-guard action perfectly complemented the goalscoring exploits, shackling the usually potent West Ham forwards and minimising clear-cut chances given up.

A fairly even first half saw Rob Sterry miss two great chances before O’Connor profited from Hammers’ defensive indecision to round the keeper and slot home from the corner of the six-yard box.

And it was two on the stroke of half-time when, from a corner, the ball pinballed around at close-range before O’Connor poked home.

The hosts pinned Watford back for a 15-minute spell early into the second period, and player-manager Richard Walker was at his best in denying the Irons a route back into the game with a plunging low save from a headed-on long throw.

Preserving the two-goal lead meant a third Hornets’ goal would kill the game and it was Sterry – atoning for earlier misses – who was Johnny-on-the-spot in the box to provide it.

O’Connor swept home for his hat-trick before producing the best of his five finishes with a crisp half-volley from a near-impossible angle close to the byeline.

Such was Watford’s dominance, they had the ball in the West Ham area often enough as the game wound down to see a clearance hit O’Connor and rebound in for a sixth Hornets’ goal and a 16th goal of the season for the young striker.

There were stand-out performances all over the pitch – debutant Adam Gallichan impressed in central midfield  – but only one candidate for ‘Man of the Match’: hotshot Mark ‘Junior’ O’Connor with his nap hand.

WATFORD IFC reached the IFA National Cup semi-finals for only the third in the club’s history with a gutsy 3-1 triumph away to St Johnstone in Kinross. 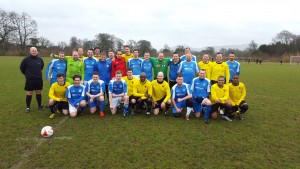 The two teams prior to kick-off

Blustery and wet conditions greeted the Internet ‘Orns as they journeyed north after a night out in Edinburgh the previous evening.

After the first quarter of an hour, which saw both teams probing for a first key opening, the game broke into life when a long drop-kick from player-manager Richard Walker in goal cleared the Saints’ defenders’ heads and allowed Tommy Twelves to expertly lob home on the run.

The Watford forward scored another almost immediately – and this was all his own work. Having chased a ball into the left channel, options looked limited but Twelves set his sights on goal and let fly with a fizzing half-volley from a tight angle which ripped across the keeper and into the roof of the St Johnstone net.

But rather than having the luxury of preserving a two-goal lead in the second half, it was the protection of a one-goal advantage that became key after Watford let in a soft goal at a corner just before the break.

And it was all hands to the pump in the Hornets’ box with some remarkably determined defending from the likes of Cleveland Brandy, Matt Ainsley and player-coach Maurice Clarke during several spells of Saints’ pressure.

Walker was everywhere inside the six-yard box, collecting or punching cross after cross interspersed with a couple of fine reaction saves.

And this team display of defensive belligerence meant that a third Watford goal would likely kill the tie.

It came no more than 10 minutes from time. Tireless work from Lamar St-cyr,  paired up front later in the game with ‘Man of the Match’ Twelves, helped work an opening for Ben Pegram who slotted home with a low finish inside the near post.

The woodwork was tested at both ends as the sides traded late blows in search of that coveted last-four place, but it was the Internet ‘Orns who capped a superb trip north of the border to set up a semi-final tie against Rochdale.

Preston B or Livingston GS will play for the right to face the winners at the IFA National Cup Final.