Watford IFC booked their place in the Quarter Finals of the IFA national cup this Saturday with a comprehensive 4-0 win over KaisAyr at Parmiter’s School. The home side, recording their first win of the calendar year in the process, took advantage of some hesitant defending to lead one-nil at the break and then stuck manfully to their game plan to add three further goals in the second half. 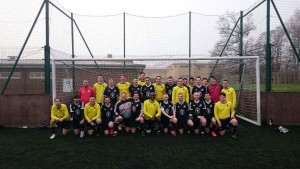 Having travelled almost 300 miles on the Friday, before then sampling the local night life on arrival, KaisAyr started the game surprisingly well. Their energetic early approach twice testing the Watford backline but without getting shots away. The Internet ‘Orns soon settled down though and opened the scoring as Ally Hill flicked on a cross field box and, though he’ll tell you otherwise, turned to see a defender get the last touch.

Whilst the yellows pressed for a second, going close with a number of set pieces, KaisAyr fired a warning shot (quite literally) off the face of the crossbar. After breaking with pace their forward cut in and was unfortunate to see his fierce strike cannon back and out for safety.

After playing out the remainder of the first half, the home side continued to press early in the second and were soon rewarded. Daniel Butterick, playing at wing back for the day, crossed for Mark O’Connor to bundle home for 2-0, before Ally Hill slammed home for 3-0. Whilst neither goal was particularly pleasing on the eye they took the wind out of the Scottish visitors and effectively sealed the tie.

At this stage it would’ve been all too easy for the Internet ‘Orns to take their foot off the gas, but with the experienced Walker and Clarke at the back (aided magnificently by all those in yellow ahead of them) that wasn’t an issue. A fourth goal was added in stoppage time too as Ally Hill raced clear, rounded the keeper, and finished well for his second of the game. It confirmed Watford IFC’s passage into the quarter finals of the IFA Cup for the first time since 2011.

Huge credit should be given to KaisAyr who epitomise the ethos of the IFA. They travelled in good numbers, just as they did for a memorable quarter final in 2009, and were a pleasure to deal with throughout. We hope to re-pay their visit later in the season.